Artist encourages learning by connecting art to world outside classroom 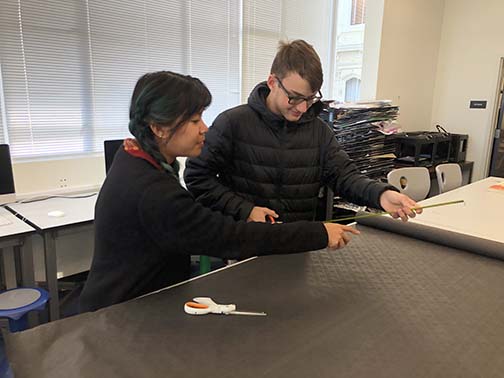 A local artist is offering an apprenticeship to Convent & Stuart Hall students who are interested.
“What we will be working on in this apprenticeship is of critical importance for our society,” artist Brian Enright said about the apprenticeship he is offering. “We are going to talk about and dig into issues that the majority of the western world pretends are not reality.”
Enright has a background in Cognitive Science and Human Computer Interaction, his first career being in usability.
He left his corporate job and became a mountaineering instructor in Alaska. He then began taking welding classes, became a welding instructor at the Crucible and later founded 12Sticks Design Studio.
“These young people are the designers of our future. They are the ones who have the ability and opportunity to create new and positive or negative changes in our world and society,” Enright said. “Working together, we will be redefining what it means to be a creator, designer and artist.”
Rachel McIntire, visual arts department chair, connected Enright with Convent & Stuart Hall.
“The apprenticeship program allows students to break out of the traditional school schedule and learn from the practice of professional artists,” McIntire said.
McIntire was introduced to Enright by Spiritual L.I.F.E Director Kirstin Monfredini, a friend of his.
“Brian’s work is mind blowing,” Monfredini said. “He is all about thoughtful work that takes discarded or reclaimed objects and transforms them into something that is deeply provocative.”
Monfredini met Enright six years ago when he was invited to speak at a Stuart Hall for Boys Chapel about his Buddhist practices.
Monfredini says Enright’s 2018 sculpture of a flower built out of confiscated weapons from the Alameda County District Attorney’s Office is “one of the best dialogue starters in the art world.”
Students who are selected for the apprenticeship will visit Enright’s studio and learn about sculptural techniques.
“I became interested in art during my freshman year,” junior Harriet Ritchie said. “I applied for the artist apprenticeship because I wanted to push myself out of my comfort zone.”
Ritchie, who was selected for the apprenticeship, is currently enrolled in Standard Level Visual Arts Year 1 in the International Baccalaureate Program.
“The process of making art can be really frustrating for me,” Ritchie said. “Through this artist apprenticeship I hope to learn how to have patience with myself and enjoy the creative process.”
Ritchie will be able to apply the sculptural techniques she learns with Enright as the artist and his apprentices work on a project on one of the campuses. It will be displayed in January.
“It’s been a wild ride full of so many challenges, but it is still exciting and a gift to be able to share what I’ve learned to excite and inspire others,” Enright said.