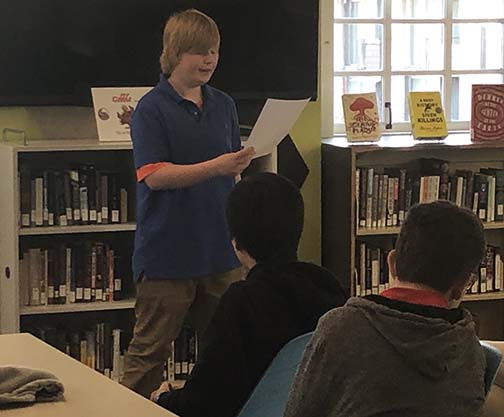 Connor Moore gives a speech to his class during freshman elections on Monday. All other class elections took place last May.

“It’s important to have a leader of each class so your ideas can get to the head of the school,” freshman Drake Warren said. “You should have class [representatives] because they can talk to the other leaders.”

Lev Cohen and Connor Moore both ran for the two available positions.

“So far this year, our grade has made a name for themselves,” Cohen said in his speech. “I can advocate for larger scale change.”

After speeches were given, Michael Buckley, Chair of Community Life, explained to the freshmen how Student Council functions at Stuart Hall.

“We have an executive committee that represents the entire student body,” Buckley said. “In addition to that, there are representatives that represent each class.”

“The two representatives for your class on that council are going to be there to support the executives at events,” Buckley said. “They’re going to take on one or two big projects to meet the needs of the student body.”

Since two people ran for the two available positions, both were elected by default.

“With Lev and Connor it’s going to be pretty fun,” Warren said. “If we want something done like a big change for the school, we could actually make that happen.”