Knights lose first match of school year, say they know where they need to improve 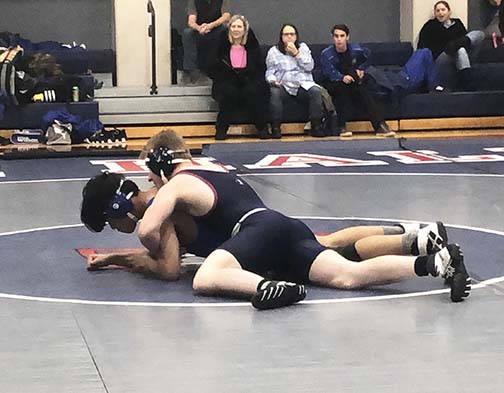 Captain Doug Dawkins wrestles with a Pinole Valley Spartan during a home match on Nov. 29. The Knights lost their first tournament of the season, but say they will focus on rebuilding the team by training promising underclassmen.

The wrestling team lost its first match of the season on Wednesday against Pinole Valley High School and Saint Patricks Saint Vincent High School, but wrestlers say this season is meant for the team to rebuild.
“It was a good first match for us as a team,” captain Douglas Dawkins said. “We had some great individual wins, and we now have a good sense of where we stand.”
After losing key wrestlers from last years’ senior class, the team is rebuilding its roster with promising underclassmen.
“Our goal for this season is to get as many matches as possible and to establish a solid team culture that we want for the future,” assistant coach Bruno Vetter said. “There are novice wrestlers and some with experience, making up a good group.”
The team practices five times a week in the Little Theater on the Broadway campus and has an additional strength and conditioning practice weekly.
“I’m looking forward to the season because I want to improve my skills and become a stronger athlete,” sophomore Zeke Noveshen said. “Wrestling in matches against other competitive high schools is a great opportunity to get physical.”
With seven matches in the calendar, the team hopes to utilize the new talent of the experienced underclassmen.
“I have been wrestling for around six years and participated on a club team for three seasons,” freshman Joey Hubbard said. “I enjoy physical sports and am happy that I can contribute to our high school team.”
In addition to having new wrestlers, the team took on Vetter as its new assistant coach this year.
“For me, wrestling is very different from other sports because of the required technique and work to become better,” Vetter said.
Vetter also has experiences with another grappling-based sport, which he says will offer him a different perspective when coaching the team.
“For the past three years, my singular hobby has been jiujitsu,” Vetter said. “The sport has been immensely valuable for my personal development and has replaced the activity of playing collegiate football.”
The Hall competed in a larger tournament against multiple schools at Vallejo High School on Saturday.
“Everyone on the team has the potential to improve their skills and become better,” Dawkins said. “Although this season is primarily a rebuilding season, I feel that we can go a long way if we put in the work.”