Students to continue sports after graduation 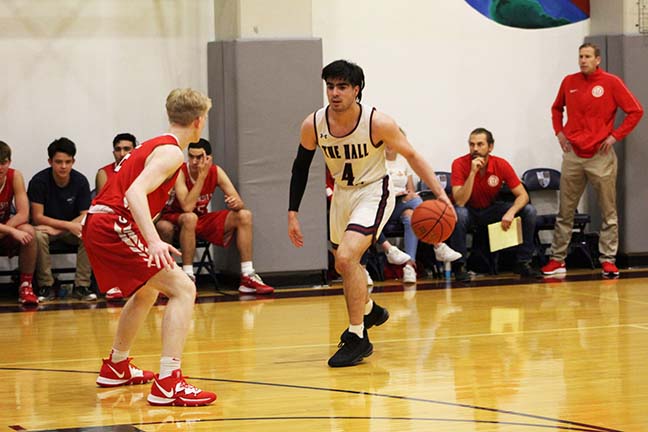 Senior Tomas Wolber gets ready to drive to the basket at Stuart Hall's home game against University High School on Jan. 14. Wolber committed to Linfield College's team in late April.

Even though senior athletes were not able to finish their final high school seasons due to the COVID-19 induced campus closure, some will continue their athletic careers after graduating later this month.
Senior Tomas Wolber signed to attend Linfield College in Oregon, where he says he hopes to fulfill his childhood dreams.
“I decided to go to Linfield because it’s a great opportunity for me educationally and in basketball,” Wolber said. “I’ve dreamed of playing in college since I was a little kid. It’s hard to imagine my life without it.”
Although Linfield College recruited Wolber for its competitive team, that does not ensure that he will play in games.
“It is possible I’ll be able to play,” Wolber said, “but I’ll need to work really hard to earn my spot.”
Not all senior athletes are going to college in the 2020-21 academic year.
“I decided to go to Kimball Union because it was the best fit for me basketball-wise,” senior Kyle Jasper said. “They need a point guard, and I fit right in with their play style.”
Kimball Union is a private boarding school in New Hampshire, where Jasper says he will spend a year working to accomplish his athletic goals before moving on to college.
“It gives me another opportunity to play basketball at a high level and prove myself to college coaches,” Jasper said. “Every time I go back on the court and play on the competitive level, it makes life a lot more fun.”
Athletics Director Charles Johnson advises athletes to keep focused on their goals as they move on from high school.
“You have to be very disciplined and you have to stay on top of your work,” Johnson said. “You really have to desire to do it. Those things charge me way more than the wins or losses.
With high school rapidly approaching its end, some student athletes say they want to pursue their athletic aspirations through college and beyond.
“I hope to pursue a job that is connected to basketball,” Wolber said. “I want to be successful at the next level, in college and in my professional life.”

Edit: The photo used to be credited to Bay City Basketball. The initial photographer was Jacqui Carlson. Permission to use the photo has been obtained.