Fall sports to begin in winter 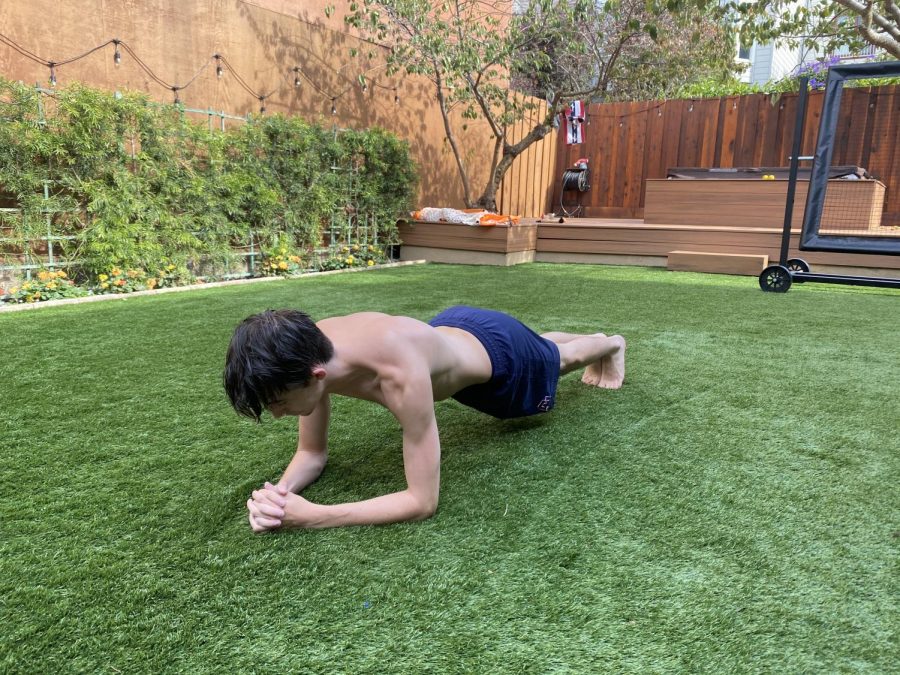 Senior Vasco Travis holds a plank in his backyard during the summer in preparation for football. Although fall sports were postponed until January, athletes are staying in shape by either working out by themselves or following an Athletics Department program.

The California Interscholastic Federation has modified the 2020-21 athletics calendar and pushed back dates for sectional, regional and state championships until March at the earliest, with games and meets beginning in January.
The CIF left each section to determine what the exact dates will be, with the North Coast Section Fall athletics season now poised to officially begin on Dec. 14.
“I agree with their choice to postpone the season,” senior Eamonn Kenny said. “It’s more important to keep people healthy and safe.”
The CIF will continue “monitoring directives and guidelines” with “student health and safety at the forefront,” according to its website. Despite practices being officially postponed until December, however, student-athletes have found ways to keep active and prepare for their respective upcoming seasons.

“I’ve been lifting weights and getting stronger,” Zeppa said. “I have access to a home gym, and the combination of that and dieting has seriously improved my size, strength and speed.”
To help athletes train and stay in shape, coaches from various teams have been reaching out to students with workouts and information on how to best improve over the extended offseason.
“I’ve been communicating and working heavily with Coach Joe, a coach for the football team,” Zeppa said. “With his help, I’ve made serious improvements to my game.”
For athletes who don’t play on any school teams, Dana Kuwahara, Head of Athletics and Physical Education, has added a multitude of scheduled virtual workouts and workout plans to the weekly athletics updates.
“We find ourselves in a non-traditional start of our athletics seasons,” Kuwahara wrote in an email to the student body. “The athletic department will still provide opportunities for all students to keep up their physical fitness, stay engaged with teams and have some fun, even in a virtual setting.”
Despite the seasons being condensed together with significant overlaps between both the new Fall and Winter seasons and the new Winter and Spring seasons, there is still hope that athletes may be able to participate in all sports they’re involved in.
“Almost every season since my freshman year I have been participating in two sports,” Kenny said.” Thankfully, the coaches have always been very accommodating with my situation and have helped me schedule my time.