Engagement in anti-racist movements sparks discussion on exclusion at school 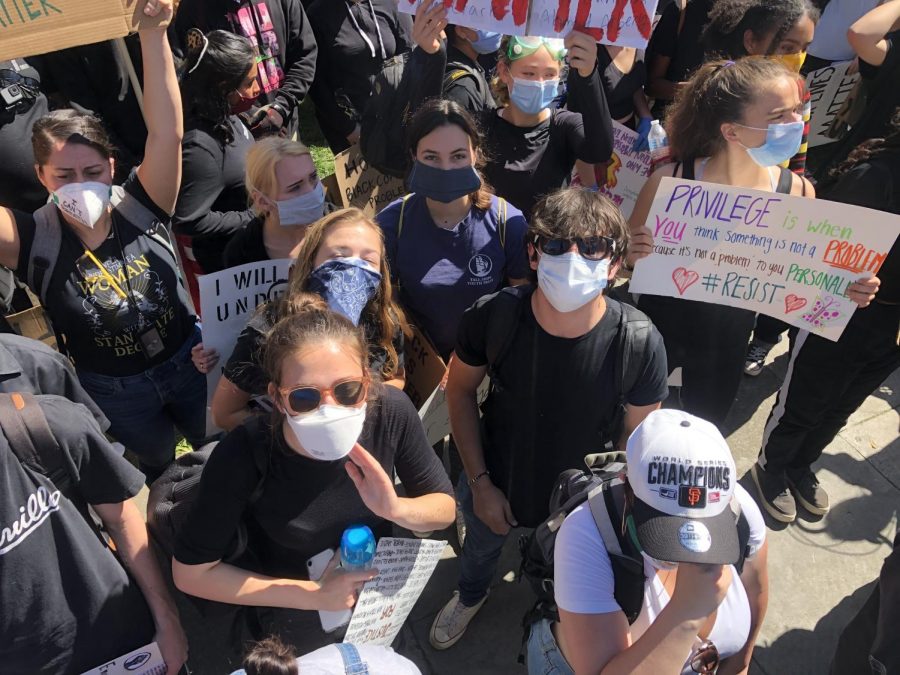 The rekindling of the Black Lives Matter movement, sparked by the death of George Floyd in late May, has some students engaging directly in the movement beyond the inclusion programs Convent & Stuart Hall has implemented over the past several years.
“I went to see these protests because it’s a very important cause, and you could help participate in ending racism in the United States,” junior Jean-Luc Desnoyers-Pina said. “George Floyd’s killing really opened my eyes, and I felt there has to be a change.”
Desnoyers-Pina participated in the Golden Gate Bridge, South San Francisco and Ocean Beach protests, and also attended a memorial for Floyd.

“The current BLM protests are about setting right a historical legacy of injustice, but it’s also about cherishing my friends and advocating on their behalf,” Michael Buckley, Chair of Community LIFE, said. “I am in wholehearted support of the Black Lives Matter movement, for the sake of our country, our school and — personally — for many people about whom I care a great deal.”
The Black Lives Matter movement started in 2013 after George Zimmerman fatally shot an unarmed Trayvon Martin, a 17-year-old high schooler, and was acquitted by a jury.

“We work vigorously for freedom and justice for Black people and, by extension, all people,” according to a statement on the Black Lives Matter website. “We disrupt the Western-prescribed nuclear family structure requirement by supporting each other as extended families and ‘villages’ that collectively care for one another.”
These “villages,” sparked by Floyd’s death, have prompted nationwide protests.

“People protest that Black Lives Matter because of the racial injustice we witness,” junior Daniel Hawkins-Collins said. “Throughout the whole civil rights movement, we African Americans have mostly sought peaceful protests. The riots that went on do not represent BLM.”
Some Convent & Stuart Hall students say they are not satisfied with the school’s attitude towards BLM and incidents of racism as an Instagram account “sacredsfspeaksout” surfaced after Floyd’s death, which posts anonymous claims of racism within the school.
“I think that ‘sacredsfspeaksout’ is a byproduct of our school not being able to communicate and have a dialogue with students who desperately want it,” senior Eon Kounalakis said. “After hearing from teachers and faculty about this issue, it seems like some faculty care more about the image of the school, rather than the students who attend it.”
Some students, however, say they are satisfied with the school’s response.
“Our school has been really aware of what’s going on,” Hawkins-Collins said about the school’s response to BLM. “Everyone has their opinions, and that’s fine, but I haven’t seen anything that needs improvement with the school about this subject.”
Convent & Stuart Hall has been offering special programming for the student body for the past several years as well as extracurricular opportunities promoting diversity and inclusion that interested students may engage in.
“We do have plans, some that already existed, others that came into being in late May, and still more for the future,” Buckley said. “Before the current BLM protests began, the school was making a variety of efforts to address systemic racism and to promote equity and inclusion in our own community.”
Past events include the Next Chapter and Manovill Fellowship genocide education programs, as well as the Student Diversity Leadership Conference.
“One of the biggest things I learned from SDLC is that diversity makes us strong, but love and compassion make us a community,” junior Andre Pang said. “It’s our job as people to appreciate each other’s differences, listen to their stories and understand where their opinions come from.”
Pang said he would like to implement what he learned into everyday student life.
“We have Chapel and other community events that make space for people to speak,” Pang said. “Including community member testimonials and stories could help us get to know each other better. These stories could be from people of color or people who don’t experience the same privileges as we do.”

Hawkins-Collins said he would enjoy community time to discuss BLM, racism and related topics. Due to COVID-19 and online learning, however, such meetings were significantly less frequent at the end of the 2019-20 school year.
“We’ll need to engage with these initial, possibly stilted or awkward conversations over Zoom now,” Buckley said. “In my experience over the last week, I believe that my colleagues want to make space for these discussions in their classrooms.”
In the midst of distance learning, Convent & Stuart Hall hosted a dialogue training presented with Generation Global during Cor Unum, April 27–May 1.
“We received procedures to prevent debating and rather foster a place for the flowing of ideas,” junior Joseph Shea said about the dialogue training. “It taught us how to come into a discussion looking for a comprehensive understanding of another person’s views.”
Also during Cor Unum Week, Jerry Kang, a professor of law and Asian American Studies at UCLA, conducted an implicit bias workshop for the entire community that preceded a discussion about race within all students’ English classes.
“I believe that Dr. Kang’s implicit bias training was very effective in helping me learn how we all have certain biases, and we can’t see it,” freshman Dashiell Lin said about Kang’s training. “I learned I had biases when it came to politics because I treat those who have my views much better than those who don’t.”
Implicit biases often cause confrontations such as Floyd’s death and result in the racist groups that BLM seeks to eradicate from society.
“When America was first being built, many people felt like they were treated unfairly, and yet, history repeats itself,” Hawkins-Collins said. “If this is the land of the free, then this land should be equal for not just Black Americans, but to all people looking to escape oppression of any shape.”