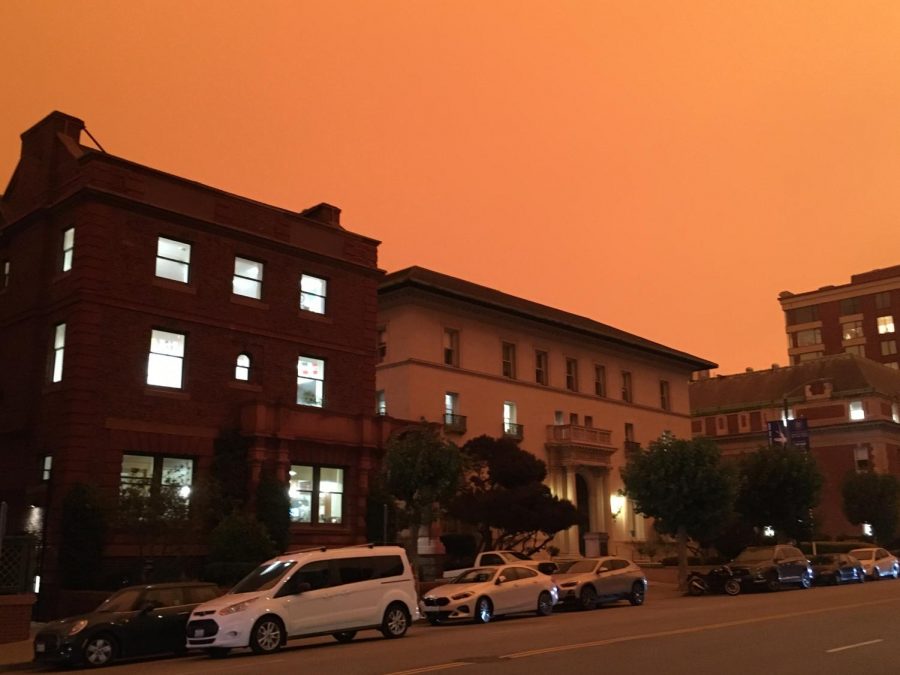 An orange sky and darkness hover around the buildings of the Broadway Campus during the morning of Sept. 9. Smoke from fires burning across California combined with Bay Area fog, forming a dark, orange sky and forcing many students and faculty to keep their lights on during the day.

As the Bay Area experiences an orange sky obscured by smoke from fires burning across California, Convent & Stuart Hall students say they feel concerned for victims of the fires and for their own health.

Students say they were confused when they woke up to a dark sky this morning.

“I assumed my clock was wrong and that it was still nighttime,” junior Connor Zanoli said. “I got nervous because I wasn’t sure what was happening.”

Some students say the fires have caused health issues for them.

“I still go outside every day for a walk, and my dad has to go out for work,” senior Jaylen Chu said. “It gets hard for me to breathe both outside and inside, since it’s hot and we can’t open any windows because of the smoke.”

Others are carrying on with their daily activities and say they are not as concerned.

“Being out in the smoke was not too bad,” Yturri-Sigal said. “I just walked the dog and was taking in the sight the whole time.”

“I know people are concerned by the orange sky we all woke up to this morning,” Breed said. “The cause is a combination of fog and smoke from wildfires up and down the West Coast.”

The sky takes on a red-orange color because of the interaction of smoke particles with sunlight.

Although the color of the sky may seem troubling, the air quality index classifies current smoke levels at “moderate.” This cleaner air quality can be credited to the marine layer, according to ABC7 News Meteorologist Mike Nicco.

“The marine layer is a stable area of air that does not rise,” Nicco said. “We’re continually pumping in cleaner air from over the ocean.”

The air quality, however, could still deteriorate.

“The smoke may also move closer to the surface,” Daniel Swain, a climate scientist at UCLA, explained in a Twitter post this afternoon, “dramatically worsening currently ‘moderate’ air quality at ground level.”

A student attributes the early start of this year’s fire season to climate change and expresses his concerns about the impact on California residents.

“The fires are a reminder that climate change is a real thing,” Yturri-Sigal said. “I’m worried about fire season. I’m in a good place, but the same can’t be said about many Californians.”