Editorial: Internet activism is only a start

Posting on social media without attending protests is not enough 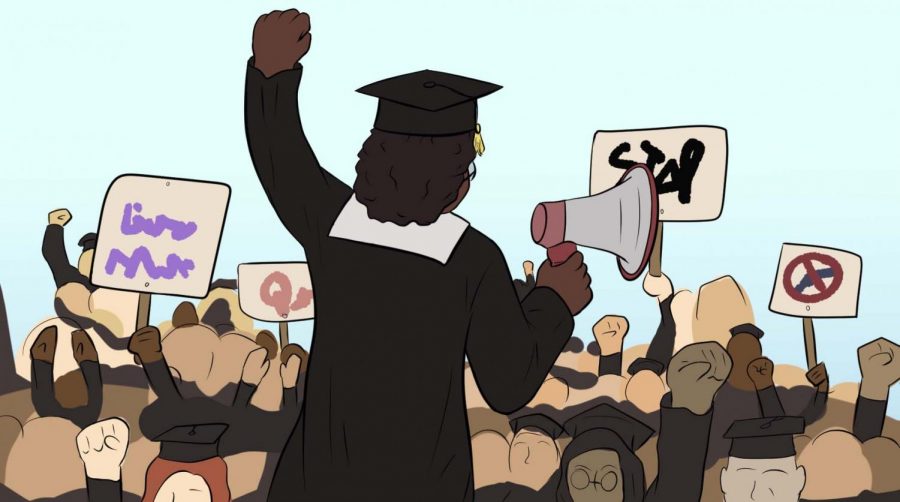 It was commonplace to open social media over the summer and click through the story feeds of Convent & Stuart Hall students, seeing post after post regarding Black Lives Matter. Such preformative activism — while good intentioned — is counterproductive, as it dissuades people from engaging in impactful activism.

Preformative activism was common among young people in general, with 42% of adults aged 18–29 reporting posing a picture on social media to show their support for a social justice cause, according to Pew Research Center. Online activism reached a pinnacle through dissipation of trending posts and hashtags such as #BlackLivesMatter.

#BlackLivesMatter’s use skyrocketed in response to the death of George Floyd, a black man killed by police officer Derek Chauvin, reaching 8.8 million — or one-eighth of the United States’s total Twitter users — on May 28, according to Pew.

Statistics on demonstration turnout show a large disparity between those attending protests and those performing activism via social media. Nearly 4 million Americans used #BlackLivesMatter daily this summer, but only an average of 23,000 Americans attended BLM protests daily, according to the New York Times.

Seventy-one percent of United States adults either strongly believe or somewhat believe that performative activism “makes people think they are making a difference when they really are not,” according to Statista.

This phenomena results from the release of dopamine within the brain caused by the positive feedback that a post receives via likes, comments and views, which establishes an internally positive correlation between the post and pleasure, according to a story published by Harvard University.

This results in the satisfaction that “makes people think they are making a difference when they really are not,” causing these movements such as to lack substantial ground and lose steam as months and years pass as posts and issues become obsolete.

“With this speed comes weakness, some of it unexpected,” Zeynep Tufekci, professor of sociology at the University of North Carolina, wrote in her book “Twitter and Tear Gas.” “The ease with which current social movements form often fails to signal an organizing capacity powerful enough to threaten those in authority.”

Preformative activism can also spread disinformation and divisive messages. Fifty-two percent of adults said that they spread “Fake News” via social media, according to a Statista Poll.

Additionally, 88% of Americans said that news they see on social media has purposefully sensationalist and inflammatory content, according to Pew.

While certainly not flawless, in-person demonstration and engagement is a tried and true method that eliminates the negative outcomes associated with preformative activism.

The most decisive and persuading statements made in the history of social justice were largely influenced by in-person demonstrations such as the Boston Tea Party, the women’s suffrage parades and the March on Washington.

Fighting for a cause, however, does not need to be something as large and impactful literally changing the world. Anyone can further a cause they support through engaging in service, organizing a small fundraiser or attending a public forum.

Think before sharing a trending post or hashtag from your feed — because change requires more than an Instagram story.