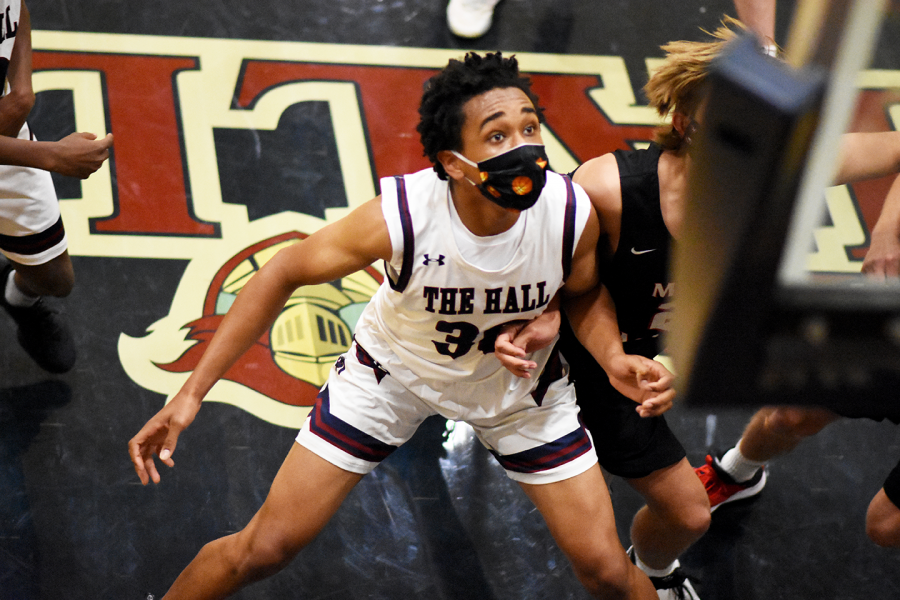 Sophomore Drake Warren boxes out a Marin Academy player to get the rebound at the JV game on May 13, 2021. The Knights defeated Marin Academy, San Domenico and the International School in the frosh-soph, JV and varsity games to deliver three triple header wins.

As the starting five works through the options of an offensive set in preparation for a week packed with league games, coach Charley Johnson shakes his head in frustration.

“We are running this until it’s perfect. Back up top,” Johnson calls out.

Twenty-one years since Stuart Hall’s founding, the basketball program has established itself as the most competitive athletic program in the school, regularly winning league competition, reaching the NorCal title twice and making an appearance at the state championship.

“I have been the head coach since the school opened, so this will be my 21st season,” Johnson said. “We have been a successful team from the beginning.”

Although the first two Stuart Hall basketball teams played at the JV level, one year later the first varsity team had a winning 14-11 record.

“I realized that we could compete against any competition in 2015 when we had a 30-4 season,” Johnson said. “We had talented guys and that team was a defining moment for the program.”

Stuart Hall basketball has produced over a dozen collegiate players and won its first-ever NorCal title in 2018, advancing to the Division IV CIF State Final at the Golden 1 Center in Sacramento. The school canceled a day of classes and bussed all grades from both high school divisions to Sacramento to support the team.

“I was a freshman at the time playing on the JV team, so it was super cool to watch the older guys compete at such a high level in a professional basketball stadium,” captain Makana Leavitt said. “It made me realize that Stuart Hall basketball is no joke, and that I was a part of the future of the program.”

“Being the head coach from the start definitely helped my connection to the program and the players, but I have had great assistants from the start,” Johnson said. “The assistants have been with the program for 10 to 11 years, which is very rare to see in high school sports and speaks to our chemistry.”

“Having multiple coaches with different perspectives and strengths has helped my game,” senior Mac Hatfield said. “It is a privilege to have
coaches who know the game so well.”

The JV team has not lost more than five games in the past six years and has gone undefeated in league play for the past two years.

“Naturally, a worry I have is to keep maintaining the bar we set as a program,” Johnson said. “I look to the younger guys as the future.”

After the coronavirus put a halt to school sports, the basketball season is now beginning its truncated season with 12 games, 10 in conference and two out of conference. Their current record is 3-2.

“We have all been waiting for so long to play basketball, and it feels great to be wearing a Stuart Hall jersey again,” Leavitt said. “As a senior I feel the need to make the most of the time we have left.”

Although league coronavirus rules allow only household members to attend games and prohibit students from attending, links to view broadcasts of all games are available to the school community.

“Some of my fondest memories at Stuart Hall are being on the home court and seeing all of the fans packed into the stands in the Dungeon,” Hatfield said. “It is hard not to be able to see a lot of our fans in person.”

While the current season is far from normal, Johnson says that the structure and community focus the basketball program has will not change.

“Winning is obviously important for me and it’s something I love,” Johnson said. “But Winning North Coast sections and league championships will always fall flat in comparison to the relationships I build with the kids on and off the court.”