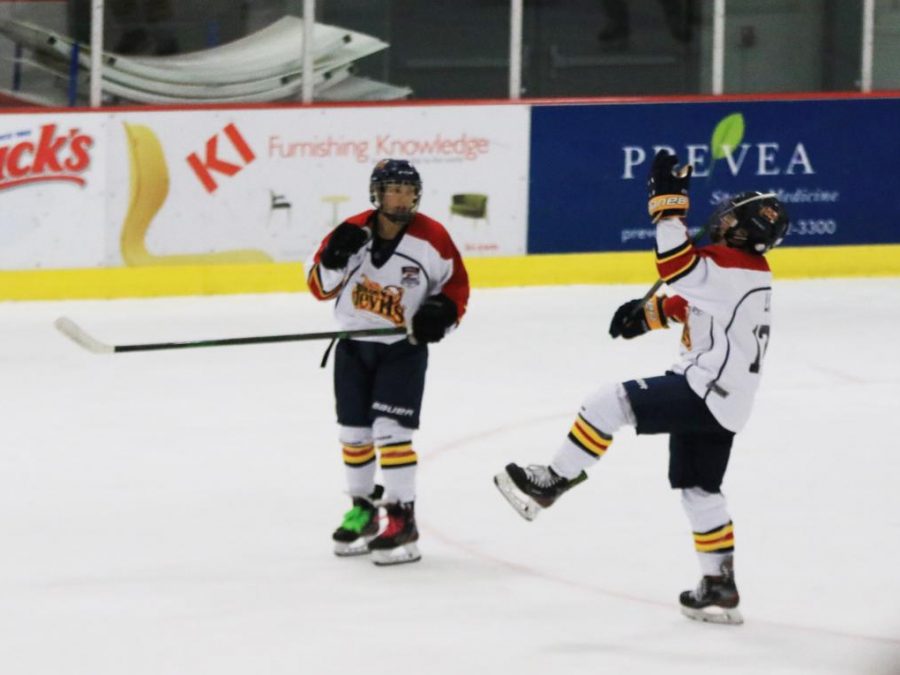 Junior Matt Lim and senior Trieu Tran celebrate after having just scored a goal during their semi-final game at the 2021 USA Hockey National Championships. The Tri-Valley Blue Devils team, which both student athletes play on, placed third in the Tier II 18 and Under division.

FWEEEEEEEEET!
Although when the final whistle blew at the end of a back-and-forth game on April 18 the Tri-Valley Blue Devils went home defeated, junior Matthew Lim and senior Trieu Tran held their heads high knowing their hockey team had finished third in the Youth Tier II 18U 3A National Championships.
“Matthew scored and tied it up when we had about 15 and a half minutes left to go in the game,” head coach Mike Holmes said. “After Matthew’s goal, we seemed to be getting the better chances, and honestly I thought we were going to score another goal and win.”
Lim’s goal happened during a penalty kill, a term that refers to his team having one less player on the ice than the other team.
“We started that period down a man,” Holmes said when reflecting on the play. “It’s not typical that you score when you are down a man like this, but Trieu and Matt have done that all year.”

Lim and Tran are the team’s best penalty kill duo, according to Holmes.
“As a freshman I joined Trieu’s team, and we’ve been linemates ever since then,” Lim said. “Our coaches don’t want to split us up. They always keep us together for the purposes of chemistry.”
The two of them led the team in scoring in nationals, with both players accounting for 6 points and having assisted each other’s goals.
“I always kept those two together because they just had this sense of where each other were, and they passed together so well,” Holmes said. “They create havoc on the other team’s ability to set up on the power play. Then they score sometimes too.”
Lim and Tran had to travel out of state for all of their games due to California Amateur Hockey Association COVID-19 restrictions.
“I think it felt extra special that we were able to do so well this year,” Lim said. “The fact that we were able to come together during COVID and be one of the best teams in the nation this year is very impressive and rewarding.”
While the national championship was held in Green Bay, Wisconsin, the Blue Devils also competed in other states such as Minnesota and Texas.
“Immediately after the end of our hockey season, I felt a huge sense of gratitude for my ability to play,” Tran said reflecting on the Blue Devils schedule, “as many teams and players across the country were held back and unable to play due to COVID restrictions.”
Both players had to miss extensive amounts of school to attend these tournaments, exacerbated by COVID-19 guidelines for travel and reentering California.
“Juggling both sports and academics at times was extremely hard,” Tran said. “Despite these circumstances, my teachers also had an unquestionable impact on my academics in light of understanding my extracurricular schedule and commitments.”
As hockey is a niche sport in California, both Lim and Tran said they have gotten used to a lack of acknowledgment for their achievements.
“It’s pretty normal to me not to be recognized, especially playing hockey,” Lim said. “It’s not too popular here. It’s just good to be recognized now that we’ve gotten so far and that hockey has taken me to a place where I could be proud of where I am.”
That said, Holmes said he hopes his players get the recognition they deserve.
“They get almost no recognition at high school and yet we play on a national team that’s an elite team of all stars from Northern California,” Holmes said. “I can tell you they’re both very modest, but I want to make sure you definitely talk up these two guys because they’re both very, very good.”