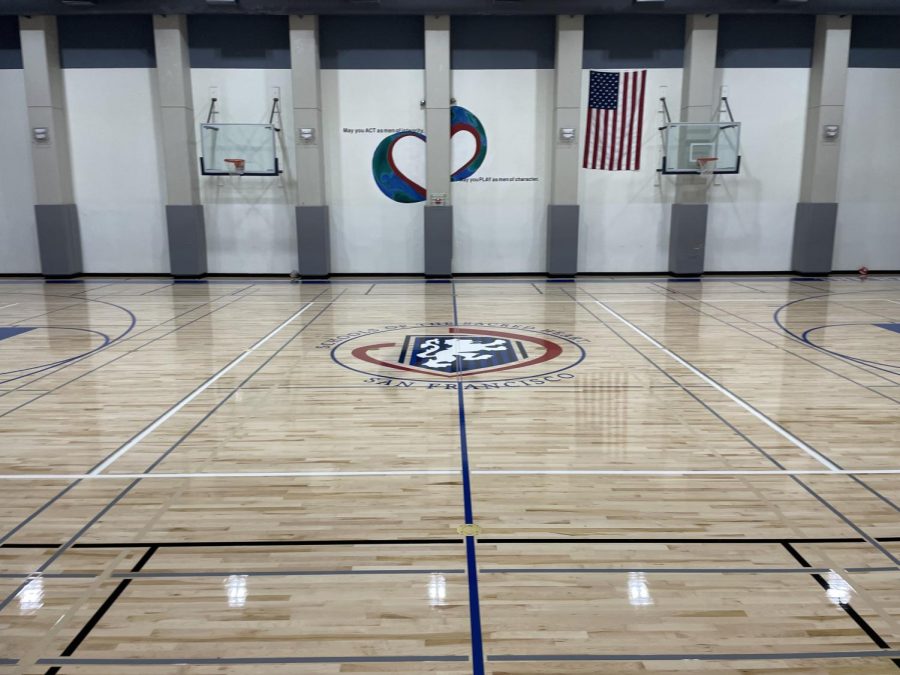 Four division Convent & Stuart Hall logo occupies the center of The Dungeon floor in place of the Stuart Hall High School shield. The school repainted the floor in addition to making maintenance changes and updates during the summer break.

Students return to campus, they have been greeted by a new Dungeon, several aspects changed by the school over the summer break including the logo in the floor’s center, the Convent & Stuart Hall logo replacing the shield.

“If you’re going to redo the floor, then you’re updating everything else about it, including the logo,” Head of School Tony Farrell said. “The new logo, it’s funny because it’s not even new. I want to say it’s more than four years old now.”

Convent & Stuart Hall officially changed the logo from the shield and knight — logos which were specific to Stuart Hall when the school was founded in 2001 — in 2015, adopting a four-school logo in an effort to unify each division according to the school website.

“You’re not going to go put something up that isn’t accurate,” Farrell said. “The gym is to me a more accurate depiction of who we are as a school, and who we are is different from when that floor was designed 20 years ago. It’s only fair.”

In addition to the logo in the center, ‘Convent’ is painted along one of the baselines, coming as a surprise to some students as the Dungeon is located on the Pine-Octavia Campus and, traditionally, is Stuart Hall’s home gym.

“As I was led to believe by older students when I was an underclassman, the dungeon had become a center of Stuart Hall spirit, I hope that despite the recent changes the legacy of the dungeon lives on,” Senior Asher Thomson said.

Many students say they share Thomson’s sentiment, worrying the changes will take away from the space.

“The dungeon is a place that most Stuart Hall students develop a strong connection to,” Student Body President Joseph Shea said. “Changing the space will definitely change how students perceive the space; however, I am optimistic that we will be able to rekindle our affinity to the space despite the changes.”

That said, some students say they like the dungeon’s new look.

“The new basketball floor is really not that bad,” Spirit Representative Eric Lee said. “It is understandable that people are nostalgic, but at the end of the day it is the space and the people in that space that matter, not the logo.”

That said, Farrell says that efforts were made to preserve Stuart Hall’s legacy, especially because of his connection to the space.

“It’s kind of like, how can we have both,” Farrell said. “You want a place for all the divisions to feel at home and, if you can at the same time, you want to honor the legacy of that space and recognise what that space means.”

Farrell says that above all he empathizes with students who take issue with the changes to the dungeon.