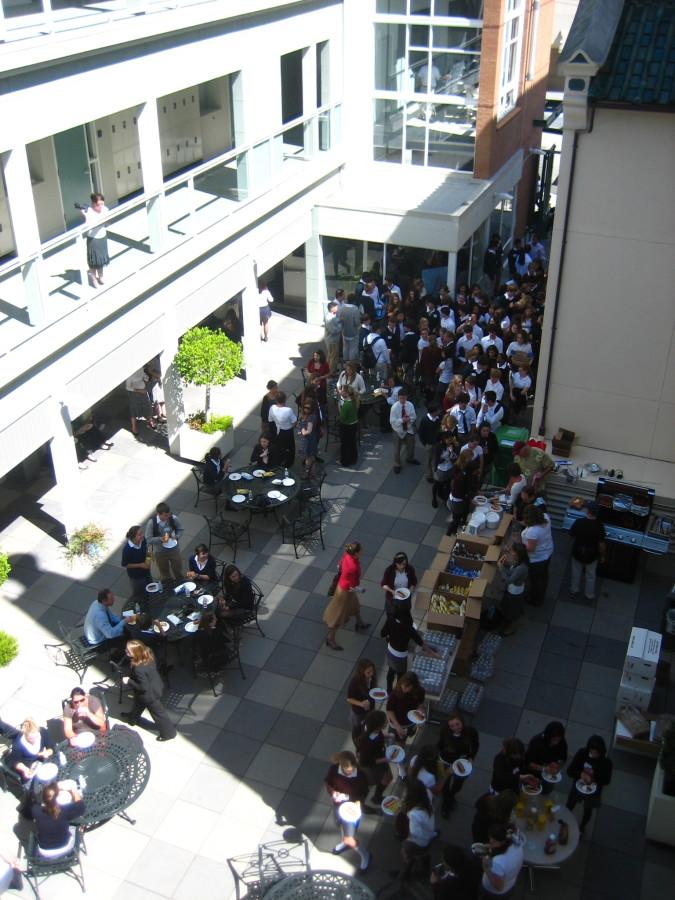 It is first period on a dreary Monday morning, and Junior Connor Bottum diligently listens to a presentation in his AP Statistics course. Along with six other students, he notes that it is a small class, but also takes time to enjoy Mr. Halkyard’s anecdotes and puns during the lecture. Connor originally signed up for a different elective, but found

himself enrolled in Statistics, his second choice. He remarks, “I was really interested in taking AP Computer Science this year, but not enough people signed up. Taking Stats is fun, but I do hope that Computer Science attracts more students next year.” Connor may just be in luck as a new plan for teaching these classes takes action next year, in the form of co-educational courses.

Earlier in the semester, Head of School Mr. Farrell hinted at a group of developmental goals SHHS had set for the upcoming years. Both were met with enthusiasm, one being the upcoming football season, the other the introduction of co-ed classes with Convent. A recent roundtable poll shows that a majority of students are eager to try the system out. Junior Albi Solana, struggling to hold back his excitement, said, “I think it would be interesting, and it would be different because we’ve been doing the single-sex thing for three years. Yet, it’s a good change for the school and I’m ready to see the results!” Though there is a feeling of positive anticipation, many students are unaware of what the program will entail.

In a nutshell, the courses that will be a part of this program are ones that often experience low enrollment, and in turn are only offered at Convent or are not offered at all. These include a variety of AP classes, in particular advanced language courses and electives. In the words of Ms. Simpson, “For example, we might have five boys interested in AP Computer Science, and Convent may have five girls also interested.  Historically, we might not have offered such a course due to lack of interest. Under our new plan, we would run a co-ed AP Computer Science course. In the future, students will have more options when it comes to choosing electives.” In regards to where the courses will be taught, Ms. Simpson clarified that the decision is still being considered by both schools, but also acknowledged that the class schedule will be altered to accommodate traveling time. On the benefit of having classes at Octavia and Broadway, she explained that the commute would be similar to those college students take between buildings, and in turn would be another way Convent and SHHS are preparing their students for the future.

As previously stated, most of the students at SHHS are enthusiastic about the recent developments. Upon hearing Mr. Farrell’s announcement, junior Redmond Lyons grinned, saying “These courses are great because we will have a wider variety of classes to choose from and more opportunities to interact with the girls.” On the other hand, the reactions of students at Convent show that some girls are not as keen to take the plunge. One junior remarks, “I think one of the most valuable things Convent has to offer is its single-sex environment; by integrating the classes, it’s going against what the school [is all about]. It’s important to fulfill the wishes of the parents who chose to send their child to a single-sex school.” In response to these lingering doubts, Ms. Simpson commented that the new program is “an enhancement to what [Convent and SHHS] already do very well. It is our goal to preserve what we love about Stuart Hall’s culture of educating its students to be young men of courage, confidence and integrity. The addition of having an occasional class with female classmates should not change this.”

In the end, the 2010-2011 school year will be one filled with change and experimentation at both schools. While SHHS prepares itself for its first year of football, its students will have a chance to be the first to experience co-ed interaction in the classroom with their counterparts at Convent, taking key steps toward a closer and stronger relationship between both schools in the Sacred Heart community.