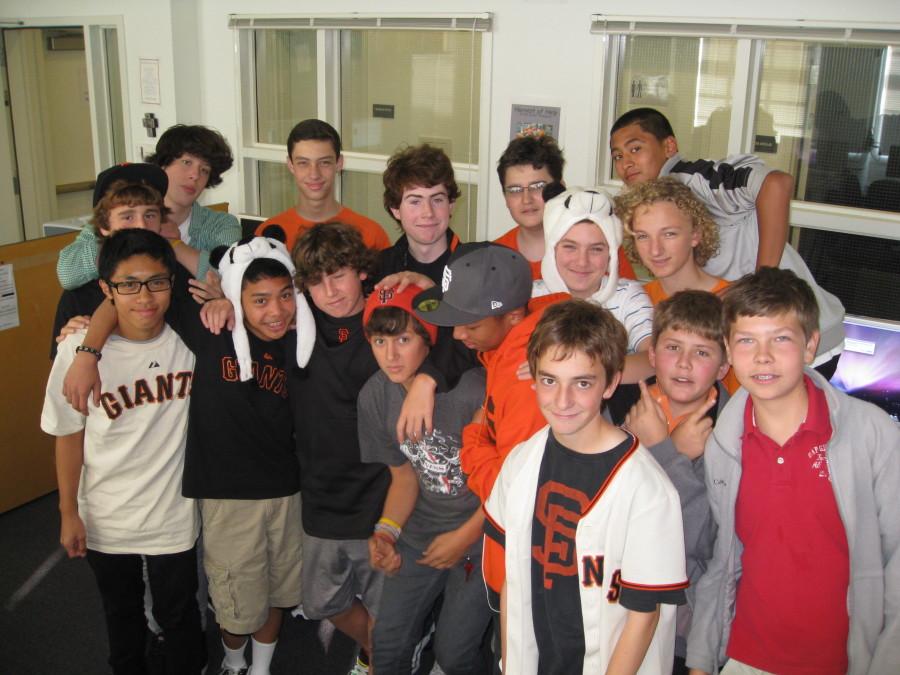 Freshman heading out to the Giants Parade

Rarely in history does a city become painted with a single color. On November 3, San Francisco was highlighted orange by screaming Giants fans sporting their jerseys and orange clothing. From a bird’s eye view, a flooding river of the color tore through downtown San Francisco as thousands of people from around the bay area danced and celebrated the Giant’s 4-1 series victory over the Texas Rangers to win the World Series.

The Giants are one of the oldest American baseball teams. Based in New York in the late nineteenth century, the club’s move to California in 1957 sparked the beginning of the San Francisco Giants. Unfortunately, the franchise has not seen a World Series win since Willie Mays’s catch in 1954, before its move to San Francisco. As the San Francisco Giants, the franchise has had many close calls and World Series appearances, the latest being the tragic loss to the Anaheim Angels in 2002. Throughout the years, the Giants have signed many baseball superstars, including Gaylord Perry, Willie McCovey, Barry Bonds, and Jeff Kent. These players contributed to seasons that were successful enough to keep fans invested in the team, but were not enough to win a World Series.

In a stunning turn of events, The Giants ended their 56 year championship drought and finally brought a World Series win to San Francisco, bringing pride and joy to longtime fans as well as new ones just introduced to baseball. A massive parade of orange and black stormed down Market Street, and cable cars carrying the players casually strolled down as a barrage of San Franciscans fought each other to get as close as possible. Although the Giants did not have a single superstar that represented the entire team, they did have a band of great players who exceeded all expectations in the post season. Among these budding stars and timely veterans were players such as Buster Posey, Aubrey Huff, Tim Lincecum, Brian Wilson, Juan Uribe, Matt Cain, and Freddy Sanchez. It is difficult to cut the list short and not name every player who contributed to the World Series win, as literally every player on the Giants was instrumental in the victory. Stuart Hall freshman Dustin Sullivan said “The Giant’s pitching was phenomenal. Lincecum, Cain, Wilson, and Bumgarner pitched amazingly during the regular season and helped us win in the postseason.” At City Hall, the players gave small speeches about their achievement while thanking the city for supporting them throughout the years.
Because the celebration was possibly a once-in-a-lifetime opportunity, Stuart Hall and Convent students were dismissed during lunch to attend the festivities. While many took the bus, a few faired better by simply walking to City Hall, since the heavy traffic prevented a large number of people from attending the parade. While there, many danced to the loud beats of drums and watched as their favorite Giants players passed by, hoping to get a high five. “I felt really proud to be a San Franciscan because the Giants represented us during the World Series, not just themselves. Everyone was happy at the parade because everything was happy about San Francisco and San Francisco Pride” said freshman Connor Abbot. Many students stuck with their friends as they made their way through the roaring crowds.

The partying was indescribable. Every street was filled with thrilled fans jumping up and down to loud music. Media and news reporters set up makeshift stages throughout the city to cover the event. Confetti was thrown and numerous horns were blown, blinding and deafening everyone at the parade. Stuart Hall and Covent students had a blast celebrating San Francisco’s first World Series win. Junior Calvin Schrader described the event as “one of the best things to ever happen to San Francisco. It shows all bay area sports fans that we can win it all.”