Back to Back Deals on Black Friday 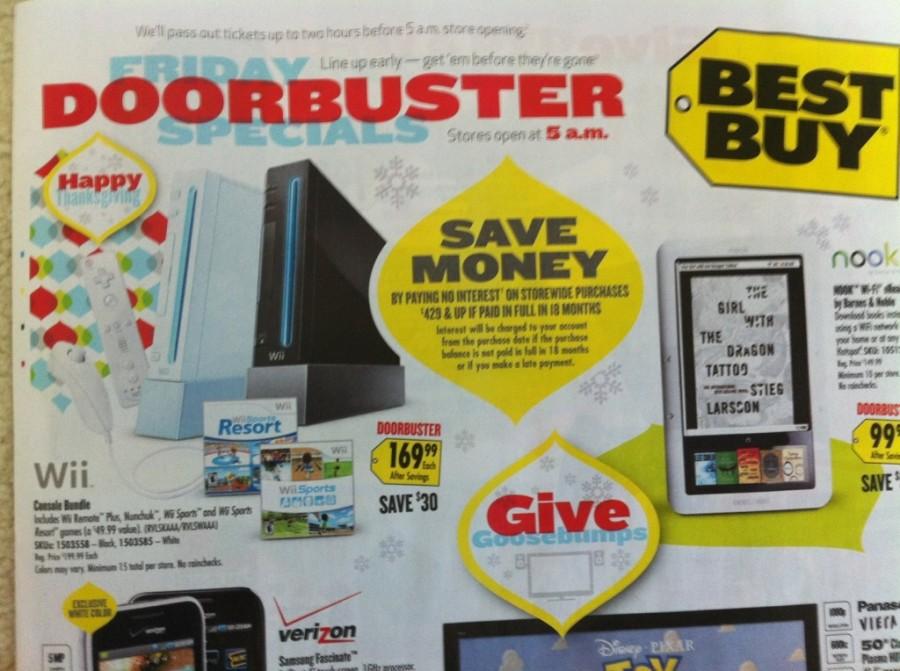 With Thanksgiving in full swing, many shoppers are looking forward to the traditional Black Friday to snag Christmas gifts and personal items at a heavily discounted price. The tradition of Black Friday began as early as the 19th century when shoppers marked Thanksgiving Day as the start of Christmas shopping. The term itself originated in 1864 when the stock market was in a panic due to dipping gold prices. It was not until the 1960s, however, when Philadelphia newspapers used the phrase to describe the rush of crowds when stores first opened their doors. Since the 1990s, Black Friday has remained the unofficial holiday for shoppers nationwide, and the statistics speak for themselves. Black Friday has been the season’s biggest shopping day since 2002 with only the exception of 2004. Stores everywhere lock onto this marketing ploy with huge discounts and use the day to liquidate old stock to prepare for the upcoming year.

More often than not, department stores offer the most savings for shoppers. Of these stores, the most popular tend to be Best Buy, Macy’s, Target, and Wal-Mart. For this year’s Black Friday, Wal-Mart has a 32” LCD Emerson TV for $198 while K-Mart is selling an Xbox 360 along with the new Call of Duty: Black Ops for $200. A number of video games at Target are reduced to $35 for the shopping holiday as well. Best Buy is offering a Wii bundle—which includes the console, an extra controller, and Wii Sports—for $169.99. At Macy’s, the retailer is offering an extra 15% off on top of any discount with the use of a Macy’s card. Select Macy’s and TJ Maxx stores are already offering the iPad for $400, $100 off the original price. Apple is expected to do drop MacBook prices and possibly iPad prices as well. In terms time, Wal-Mart already opened its doors at midnight on Thanksgiving day while Macy’s and Target opened at 4 AM, and Best Buy and Target at 5 AM.

While many have already begun to get hopes up about what deals they will snag, Black Friday is known for disappointing endings. Many alluring items that stores—especially electronic retailers—advertise exist in very limited quantities. Retailers use these tempting deals to lure shoppers into their store. Once there, sellers hope consumers will buy something else even if they did not score the bargain they came for. Thus, shoppers can be heartbroken when only the first four people were able to buy the TV they waited all night for. Nevertheless, you are sure to catch a deal if heading out to stores on Black Friday. For those who don’t enjoy waiting for hours in blistering cold temperatures, Cyber Monday is also notorious for savings online. Retailers post e-coupons and reduce prices on their websites for those who weren’t able to get out on Friday. If you’re planning to shop on Black Friday, good luck. If not, well then you can snuggle up under a warm blanket and a nice caramel macchiato in this frigid weather and just admire the persevering relentlessness of the ones who wait for days outside of Best Buy to buy a TV and a few games.