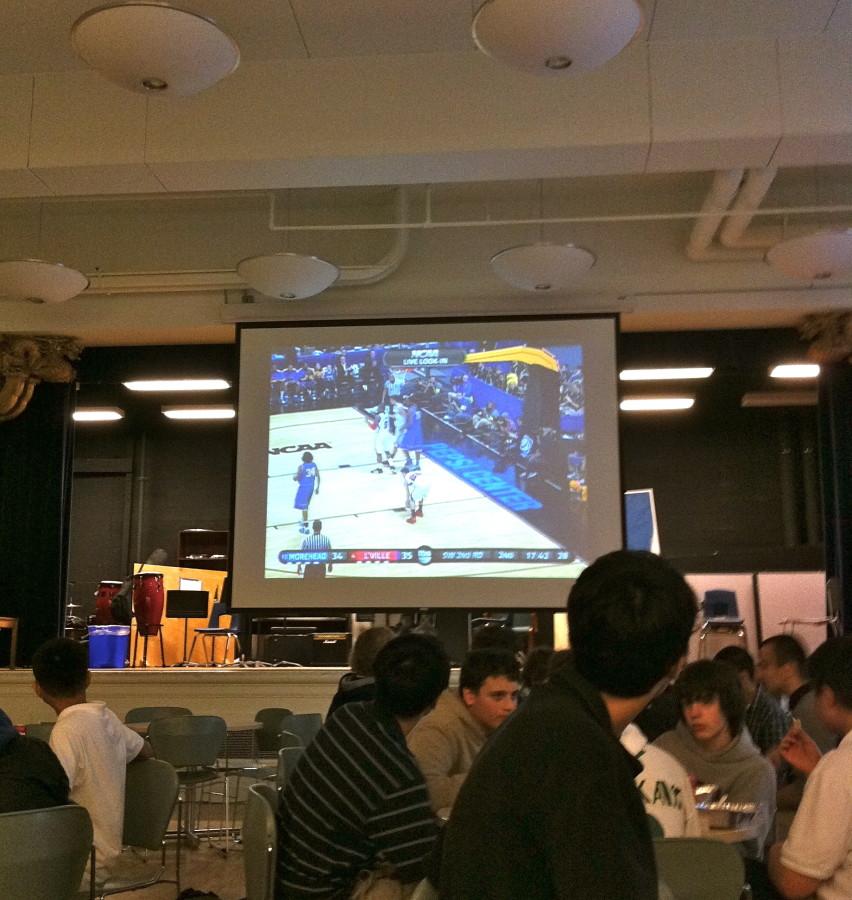 March Madness in the Columbus Room

It truly is March Madness, Stuart Hall. As the NCAA tournament kicks into full swing, many of you have filled out your brackets in predicting who will win it all in the Big Dance. Living up to the spirit, Josh Wong ’11 and I have assembled our own separate picks for the month, as seen below. Each day, Josh and I will update on the statuses of our brackets and will provide insights and responses to how the tournament is progressing. Just as many of you are competing against each other with your picks, Josh and I are doing the same, and will stack our brackets against each other each day with a running tally. Keep checking back for updates at the end of each day, and good luck with your picks!

Matt: You’ve got a Final Four, Stuart Hall…just not my Final Four. For that matter, it’s probably not yours either. For a tournament in which  Thursday night, Duke fell hard to Arizona 93-73, joining St. John’s, Syracuse, and Georgetown in my failed picks for the Final Four. The upsets didn’t end there – over the weekend, San Diego State, Ohio State, Florida, UNC, and Kansas were taken down. What you’ve got is the most unlikely of teams: Big East Tournament champion UConn, John Calipari’s Kentucky Wildcats, the surging Cinderella VCU, and the returning Butler Bulldogs. In regards to the absolute beating my bracket took, I won’t go into detail what has already happened. What’s done is done. I will, however, make my picks for the big games this weekend.

In the UConn-Kentucky matchup, I’m going to have to side with the Wildcats. Kemba and the Huskies have made another incredible run, butKentucky’s Brandon Knight has been key in the team’s huge wins over Ohio State and UNC. Butler and VCU are two extremely likeable teams – my bias aside, VCU will edge out the Bulldogs in another close game. Though the duo of Matt Howard and Shelvin Mack have been one of the biggest keys to Butler’s success, the Rams’ Joey Rodriguez has been dangerous in constructing the plays that brought down Kansas. Beyond the arc, VCU’s been deadly, hitting 30 3-pointers since the beginning of the tournament.

The Final Four takes place this Saturday – Kentucky-UConn kicks off at 3:00 P while VCU-Butler starts at 5:45 P, both on CBS. My luck has already run out, and heading into this weekend, I’m 34/60 with my games.

Matt: You win some, you lose some. Or you could lose a little more than some, a dismaying realization I came to at the end of Sunday of laying on the couch with my eyes glued to the games on TV. In pure March Madness fashion, the day had its share of upsets, and began with a few close calls with Duke and UNC edging by Michigan and Washington respectively. On the other hand, Ohio State and Kansas each coasted without a sweat for their wins. And then there are the four other games.

5th-seeded Arizona edged by 4th-seeded Texas 70-69 – that’s forgivable. 10th-seeded Florida State took down 2nd-seeded Notre Dame 71-57. I didn’t get that right, but the Irish loss isn’t a total surprise given Notre Dames performance in the tournament years prior. The most damaging loss, of course, was the matchup between 11th-seeded Marquette and 3rd-seeded Syracuse – an act of Big East cannibalization in the tournament. The Orange fell 66-62 and was added to my list of failed Final Four teams in the process. As a Hoya fan, I’ve never liked ‘Cuse, but Sunday was different. Besides UConn (who I have losing to Duke in the Elite Eight), Syracuse was one of the last real Big East contenders in the tournament. At the end of the day, only 2 of the 11 teams sent from the conference remain in the Big Dance – most of the others were eliminated in upsets.

VCU, the Cinderella at the Big Dance. Coming off a stunning win over Georgetown, the no. 11 Rams continued their magic in tearing down no. 3 Purdue’s tough defense in a 94-76 beating. Laying back on the couch,  Though I had Purdue winning, watching VCU play against Georgetown I wasn’t surprised in the result. The Rams have a promising chance in reaching the Elite Eight – keep your eyes out as they play Florida State on Friday. Late in the first half, VCU clamped down on the Boilermakers and scored 13 straight points in the final six minutes, opening up the score to 36-24. The second half also went to VCU, as point guard Joey Rodriguez kept everything in check and getting the Rams in position for all the easy shots. The bitterness over the Georgetown upset faded away – VCU truly has something special, and will head deeper into the bracket if it continues to lock down on defense and play at its own pace.

I finished the day 4/8, 32/50 total – considering that I have only 7 of the sweet 16 predicted correctly and only 1 of my Final Four teams still in the tournament, things aren’t looking up.

The Sweet Sixteen have a breather and will start up again on Thursday – each of the matchups are must-sees. Can Jimmer Fredette keep the magic alive with BYU and take down Florida? Will UConn beat a surging San Diego State team or will it prove to be another Big East bust? Be sure to tune in when the Sweet Sixteen round kicks off.

Josh: The Butler Bulldogs pulled off an amazing and impressive upset win over Pittsburgh. I know I had Pitt going into the Final 4 but going into the tourney, I knew they were the most vulnerable number 1 seed. I went 6 of 8 today. San Diego State’s double overtime win was quite impressive and I’m glad I chose them to go into the Elite 8. The Wisconsin-Kansas State and Cincinnati-UCONN games were also exciting. Kemba Walker’s continues leading the Huskies as they have been a roll since the Big East Tournament. I’m looking forward to Arizona vs Texas because of the matchup of star forwards Derrick Williams ans Jordan Hamilton. I’m also looking forward to the Marquette and Syracuse game. Marquette is an underrated team who has already beaten Syracuse this season. I’m expecting guard Scoop Jardine to have a big game. I don’t see any of number 1 seeds Duke and Kansas being upset.

Matt: Friday night proved to be another disappointment as the 6th-seeded Hoyas quietly lost 74-56 to 11th-seeded VCU. The loss marked the second first-round lost for Georgetown in two years, and ended a season that began with a lot of promise. As I believed that the team could make a magical run to the Finals, I’m both crushed (because of my bracket), but also unsurprised – the Hoyas played poorly the last five games, losing to the unranked Cincinnati twice in at the end of the season – even the return of senior Chris Wright could not spark the squad in the first round. With his graduation and the graduation of fellow former McDonald’s All-American and Big East preseason Player of the Year Austin Freeman, Georgetown and Coach John Thompson III will find themselves in a greater fix in the seasons to come. For the two seniors who were destined for greatness, only one NCAA tournament victory came to fruition. As a longtime Hoya fan, I can only let out a deep sigh at the slide from Georgetown’s 2007 Final Four run to the dismal end of this year’s season.

Today was great success for my bracket for one reason – Butler. In many ways, the matchup between the 8th-seeded Bulldogs and 1st-seeded Pitt defined what March Madness proved to be the biggest thriller so far in the tournament. With both teams neck-and-neck through the second half, it came down to the final seconds as Butler edged by with the 71-70 upset. With 1.4 seconds left, Bulldog Shelvin Mack fouled Gilbert Brown with Pitt down 71-69. Brown made the first free throw but missed the second on the rebound, Butler’s Matt Howard was fouled by Nasir Robinson. With 0.8 seconds left, Howard came in the clutch with the free throw, and for the second time in a row sealed the game for the Bulldogs. Yet, these last-moment fouls weren’t particularly smart – oftentimes, the tournament games come down to who played better, but to the team who made the less mistakes. For the mess I’ve gone through with Georgetown, my prediction Butler’s win is a little bit sweeter. Mack finished the game with 30 points, two short of his own career high and the Butler tournament record – yet, his great performance almost came to nothing with his foul in the final seconds, something he called “the dumbest mistake of my life.”

Tomorrow, be sure to catch the revival of the Duke-Michigan rivalry with the 11:30 AM PT matchup on CBS.

Josh: I was surprised at how many close games there were today. I didn’t do so well as I had Louisville going into the Sweet 16. My West and East Sections are perfect but in the Southwest and Southeast, I lost 4 out of 10 games. Hopefully things are better for me tomorrow. Go Buckeyes.

Matt: The first day of the Second Round went smoothly for most of the favorites (but not necessarily on my bracket) – my upset of the day, 13th-seeded Princeton over 4th-seeded Kentucky was surprisingly close throughout, though the Wildcats pulled out with a 59-57 win over the Tigers. The biggest upset for many came at the hands of 13th-seeded Morehead State, who stunned 4th-seeded Louisville when Demonte Harper sunk a three-pointer with 4.2 seconds to go to set the final score of 62-61, Eagles. Considering my prediction of the Cardinals heading toward the Elite Eight, the loss hurts.

Yet, I find the greatest disappointment in 11th-seeded Gonzaga’s sound 86-71 win over 6th-seeded St. John’s. As I predicted the Red Storm in the Final Four, the loss is a huge blow to my bracket. The loss spells a disappointing end to St. John’s fantastic season under new coach Steve Lavin, who guided the team to a 12-6 record in the competitive Big East (11 teams in the Conference were seeded in the tournament). The loss of St. John’s leading rebounder, DJ Kennedy who is suffering a torn ACL, definitely played a huge role in the loss. Watching Zags come off with the win, I finished the day with 12/16 picks, a pretty solid start. I’m looking forward to another great day tomorrow – my game to watch is the George Mason-Villanova matchup at 2:10 pm E on TNT, while I’m also pumped for the return of point guard Chris Wright for Georgetown in its matchup against VCU. Can the Hoyas rebound after a dismal four-game losing streak and redeem themselves after a terrible exit at last year’s tournament? One thing’s for sure – tomorrow will be another exciting day for basketball, so keep watching and be sure to check our updates at the end of the day!