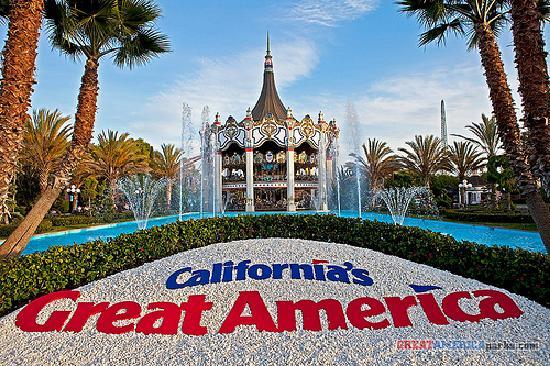 Amusement parks are a big attraction to many tourists and also to the people who live in those cities during summer vacation.  There are many amusement parks in California but only the best get the most people to visit.  Three of the ten are California’s Great America, Six Flags Discovery Kingdom, and Six Flags Magic Mountain.  I have personally been to California’s Great America and Six Flags Magic Mountain.  I have yet to experience the vast one hundred thirty-five acres of Six Flags Discovery Kingdom.

Let’s start with Magic Mountain.  SFMM has been known as the “Rambo of Amusement Parks” and the “Xtreme Park“, due to its large collection of white-knuckle coasters. In 2001, SFMM took the world record of the most coasters in any one park, although there is much debate as to whether Superman The Escape is a roller coaster or not.  In 2007 they removed two roller coasters, so this resulted in the loss of the record. The park is also home to Hurricane Harbor Water Park, which has a separate admission charge, but there are no shortages of water rides within the park itself. SFMM has one of the best selections of water rides in a park, including two flume rides.

California’s Great America is a great theme park, but recently has been dying down in the past years.  The park is quite large and is easy to navigate, as it is flat. The park is not very well themed but is reasonably landscaped. It has a good variety of coasters but the park is seriously lacking in a good wooden roller coaster. Great America has a good selection of kids’ rides, but the water and flat rides are standard.  Nothing in the park with the exception of Top Gun and Drop Zone stood out as exceptional, but it should be noted that nothing stood out as bad either.  Baldwin Liu ’12 is quoted saying that his favorite ride is: “I like Top Gun, now called Flight Deck.”

Last but not least is Six Flags Discovery Kingdom.  Discovery Kingdom distinguishes itself from all other parks in the fact that it has a full complement of land/aquatic animal shows along with a robust ride lineup.  Mrs. Saltveit regaled me with an amusing story from her time at Discovery kingdom: “I went on the water ride where you get into a raft with three other people.  I was laughing at my friends because they were the only ones getting wet.  Near the end of the ride there are people who wait on the sidelines spraying rafters as they float by. Of course I was the one who got totally soaked.” The coaster lineup is anchored by a unique shuttle launch, but the rest of the coasters, while fun, are not one-of-a-kind. Although there is an adequate selection of flat rides, many of them have height requirements that are restrictive to families with smaller kids.  It has been a long transition to convert this former marine park into a true amusement park, but the goal has been finally achieved.

Have fun if you visit one of these parks this summer !