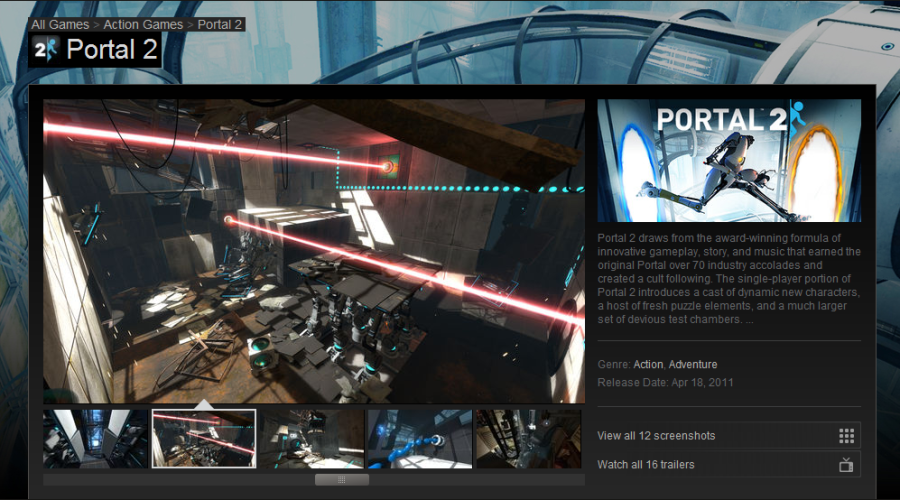 About a third through my playthrough of Portal 2, the realization dawns on me that I have been playing for three consecutive hours. Normally, for me, this would not be unusual, but the night before the final exam of my most difficult class in my Junior year, it certainly is. Portal 2 is one of those games that you’ll wish you were playing when you are not playing it and morbidly fear completing its campaign.

The Story and Humor

The game picks up some time after the events of the first Portal. Chell, the game’s protagonist, wakes up in a decrepit Aperture Science Hotel Room. From there, a bumbling personality core called Wheatley breaks apart the room and sends her through Aperture. Eventually, Wheatley accidentially awakens GlaDOS and sets forth a surprisingly involving, and very funny narrative.

Really, to give any more away is to spoil a lot of the fun of Portal. Learning the secrets and history of Aperture Science and its relationship to the vibrant world of Half-Life is a large part of the game’s appeal. Showing any screenshots from beyond the first quarter of the game would spoil not only the story, but also puzzle-solutions, environments and gameplay mechanics.

One thing that is safe to reveal is that Portal 2’s writing and voice-acting is phenomenal. Stephen Merchant, genius behind the British Office, makes his video-game debut with flying colors as Wheatley. His dry delivery of Wheatley’s lines perfectly characterizes him as a bumbling idiot, and listening to exchanges between him and GlaDOS are sure to leave many in stitches.

Perhaps most importantly, Portal 2 makes its greatest innovation in the delivery of its humor. Environments, not just scripting and dialogue, deliver laughs in a way unseen in any other medium. Be it a darkly humorous sign or a beautifully ruined office, Portal 2 delivers its hilarity in ways unique to the medium, and for that, it deserves high commendation.

Perhaps even more dangerous than story-spoilers, knowing about Portal 2’s in advance can absolutely ruin the experience because the game constantly introduces surprising new elements. For the sake of completion and to sate the interest of those interested, I will include information on it. That said, MASSIVE SPOILERS FOLLOW, READ AT YOUR OWN RISK

Portal 2 begins simply enough and might come off as non-innovative to fans of the first game (in fact, a few test chambers are entirely recycled, albeit, in decrepit form). Simple staples from the first game, like conservation of velocity through portals, return for the first few test chambers. This is all fun and dandy, until Portal 2 decides to get creative.

The first thing that the game springs on you are “thermal discouragement beams”, which are lasers that can be directed into light-switches using mirror cubes and portals. The difficulty curve in the game is immaculate, and simple “teaching” levels give way comfortably to diabolically insane challenges that the player ultimately feels prepared to handle.

The pacing for Portal 2 is highly refined as new puzzle-elements are introduced at a near-constant rate, and just as the player feels he has mastered one element, that element is deployed in an innovative new way making it fresh again. For example, the lasers, an early-game element that feels pretty easy to master, is given new life as the player must simultaneously activate three light-switches using only one mirror cube. It is through challenges like these that Portal 2 achieves its incredible balance and remains fresh to its very end.

Later in the game, new, Portal-controlled environmental aspects, like light-bridges and ascension-rays, challenge the player in unexpected ways. Three types of special “gels”, orange, blue and white, alter the environment in clever ways. Blue gel turns any surface it is applied to into a trampoline. Orange gel-coated ground is slick and slippery and lets the player achieve incredible speeds, and white gel turns anything it touches into a portal-able surface. What is particularly genius about these elements is that the player never gets to control them directly. Instead, the player must utilize his/her limited abilities to indirectly solve puzzles by manipulating these gels and bridges in creative ways. This forces the player to think of all possible applications of the Portal Gun, and as a result, the player’s most powerful asset is his mind. This lends the challenges a Braid-like sense of cerebral bashing, making the difficult challenges incredibly satisfying to solve.

Not all of the challenges soar. In particular, one mid-game plot twist removes the player from the test-chambers and sends the player on a long-trek through Aperture’s ancient hallways, comes off as mediocrely designed in comparison to the “meat” of the game. The gameplay-shift this entails makes these challenges more about searching for the one area of Portal-able surface than using the Portal Gun’s capabilities. This effectively turns the game into more of an adventure game than a puzzler, and, while the detailed environs are a joy to explore, challenges become slightly tedious. Thankfully, this section of gameplay is brief and bearable.

Spoilers end here. Ultimately, Portal 2 is a nearly immaculate experience marred only by a short section of substandard puzzles.

Portal 2’s best visual aspect comes in its artistic direction. The sterile test-chambers fall apart to reveal the “backstage” of the facility in all its vast, technological ruin. Different parts of Aperture showcase the company’s history, thus, visualizing a progressive history culminating with the modern era. The quality of the art-style, as well as the “living” feel of the incredibly animated rooms and backdrops as they are literally assembled as the player enters them, makes Aperture Science a fun and interesting place to explore, a credit that few shooters can live up to.

From an auditory standpoint, Portal 2 is also flawless. Procedurally generated music seems to compose itself as the player traverses through climaxes and crescendos within a level, and frames the player’s emotional and intellectual progression as he solves puzzles. For example, being launched into the air by an “aerial faith plate” speeds up the pace of the music and adds tense percussion beats while falling into a floating light-tube slows down and mutes the bass. Voice acting by Stephen Merchant and Ellen McLain remains flawless and hilarious. Jonathan Coulton, writer of the infamous “Still Alive”, returns for a catchy ending theme that wraps up the entire experience satisfyingly.

Portal 2’s cooperative multiplayer mode is a unique campaign containing the game’s most difficult challenges. With two portal guns and up to four portals deployed, an unique type of synergistic thinking is needed for any level of success. That said, Portal 2 is not a game that can be enjoyed without voice chat or with strangers. Using only pings and gestures to communicate is severely limiting and leads to considerable frustration. Playing with a headset and with a friend, the game becomes considerably more playable, intriguing and fun. Ideally, Portal 2 works best in its splitscreen mode, which simplifies interpersonal communication significantly and paves the way for synergistic thinking nicely.

That said, Portal 2 would have benefitted with a set of competitive challenges and leaderboards. Challenge maps, one of Portal 1’s best aspects, are jarringly missing from this game. This harms the game’s already limited replay value and comes off as a missed opportunity for the developers.

In the end, the worst thing that can be said of Portal 2 is that it has some annoying fans. Even with its few flaws, this is one of the best puzzle games of the generation if not all time. Portal 2 fits the geniuses at Valve and Digipen as the foremost advocates of innovation and creativity in game-design. Strongly recommended. 4.75/5