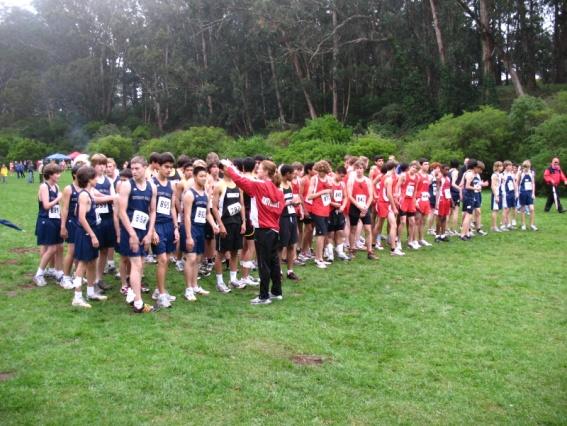 This year cross country is back and larger than ever with a grand total of around fifty athletes. They’ve been hard at work all summer and they’re pumped to get the new 2011 season started with a bang. There is a lot of potential throughout all tiers of the team, but more specifically, this year’s “A” team looks set to knock the wind out of all other Division 4 schools. Senior, Michael Chan, leads the pack with stunning performances of speed and endurance during the races. He has become a rock for all the Knight’s races during the season. The rest of the “A” team includes: Joseph Hildula, Liam Lynch, Baldwin Liu, and Brandan La. On the Cubs’ side, junior, Jane Stephens is set for another record setting year. If there is any testament to how hard she works during the season, it is the fact that she runs with the Stuart Hall “A” team for every practice. Much of the team as a whole consists of seasoned veterans from the track team, so we can count on blazing times from those athletes as well.

The first race of the season is the College Prep Invitational at Point Pinole in Richmond. Although it is only an invitational and does not count towards the team’s standings, it helps to situate where everybody’s skill level is. Just because it does not count as an official race, it is still just as difficult as any other. During last year’s race at Point Pinole, there was a forest fire in the same vicinity as the course, and 100°F temperature didn’t help.

There are also many exciting trips and events that the  cross country team as a whole will go to. Headlining these events, is this year’s trip to the Mt. SAC Invitational in Los Angeles. The Mt. SAC Invitational is actually the biggest cross country race in the world, with around 22,000 competitors from around the globe competing each year. The Knights and Cubs will be taking a side trip to Disneyland after the race for a night of fun and adventure. Other fun events include a Cross Country Dinner at Stuart Hall and possibly another overnight stay in Fresno if the “A” team ranks high enough in the season.

The Sacred Heart Community is welcomed and encouraged to come to any or all of the races being held this season due to the fact that it is a spectator sport. The Knights and Cubs are sure to perform like the well-oiled machine that they are and demonstrate spectacular feats of running prowess.

A running schedule of the Cross Country Team’s races is featured below:

Sunday, September 25:  Race for the Cure